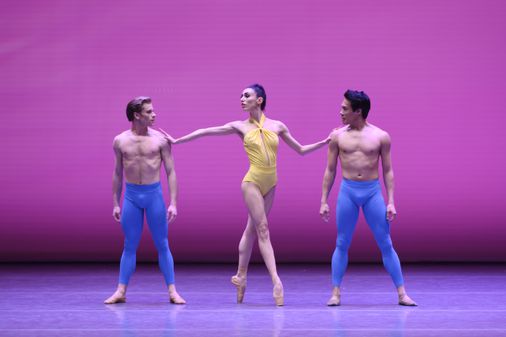 For a spectator in a proscenium theater, watching the ballet unfold on stage is a grandiose experience. While you sit quietly in the dark, you can shift your vision from side to side, up and down, but the perspective remains basically the same, and there is a certain sense of estrangement between the viewer and performer.

With its new virtual reality project, Dance in VR Series on Facebook, the Boston Ballet is blowing up the 4th wall, giving viewers at home a way to get into the heart of the action. The dancers seem to be thrown over your shoulder, and you can almost feel the breeze of a flurry of pirouettes that unfold as if they are just inches away. It is an intimate, visceral, immersive and interactive experience. And since the company won’t be performing live at the Opera before “The Nutcracker”, it might be the best thing to sit in the audience this summer.

“You can experience the performance at home as if you were sitting in the middle of the [performance space], see everything from the inside, ”explains Ernesto Galan, Boston Ballet videographer for 12 years. “It’s like being transported to another world.”

For the new series, the company has commissioned three works designed specifically for virtual reality – “Zoom In” by Ken Ossola, adapted from his work of the same name for the recent “Process & Progress” program, a recently modified version of the famous “ Petal “by Helen Pickett” and a new work by the company dancer My’Kal Stromile, “On (my) line, In (my) mind”, shot in December in a large industrial warehouse in New Bedford. All three pieces are choreographed to be viewed through a high-end Oculus headset, but even some gaming headsets can give you a taste of this new way of watching dance. (If your only option is your tablet or smartphone, your best bet is to sit in a swivel chair in a dark room. You change perspective by moving your device.)

Virtual and augmented reality in dance has been around for some time, but the Boston Ballet believes it to be the first major company to delve deeper into ballet technologies. The project builds on the advancements made over the past year during the company’s first-ever virtual season, which not only expanded the reach of audiences around the world, but also deepened understanding of the technology. .

Boston Ballet Artistic Director Mikko Nissinen says this is part of a “living theater” for contemporary audiences. “I didn’t want to be a museum or a church, but to be part of today’s society that is moving forward,” he explains. “We explored this technology five or six years ago, but the audience limits were so narrow that I thought there was no point in getting on the bandwagon. Now that the technology has developed in leaps and bounds, it has opened up so many possibilities. In the future, it could be almost a new art form for people to experience dance, music, theater. This is just the beginning.”

It is not a simple or inexpensive process. The dances are filmed with a globe-shaped device integrated with six different cameras placed in the center of the space to capture a 360-degree environment. The images from each camera are then “stitched” into a continuous flow that the viewer controls. While each dance was filmed in a day, the editing process for each was an intensive week of post-production that Galan says pushed his system to its limits.

However, he says he’s excited to be part of the company’s exploration of new perspectives for ballet. And he can imagine moving from virtual reality to augmented reality once this technology is more developed. “In the future, you could be at the Opera to watch a show, put on augmented reality glasses and see ‘Swan Lake’ [performed] on a lake, or ‘Corsair’ could actually be on a pirate ship crossing the ocean. It could really improve performance.

For the current VR series, the challenge for the choreographers was to adapt the dance so that viewers could look in any direction at any time and see the dance. Ossola’s approach maintains part of the tradition of bringing important materials, such as duets, to the fore. Stromile’s choreography draws the eye around the space in a circular fashion. Pickett’s work, however, filled every nook and cranny of space with simultaneous movement. For the dancers, that meant treating each phrase like a solo in case someone chose to look their way, and it was a cardiovascular feat to dance hard continuously for the duration of the piece with each take – the technology could not be changed in the early days. and stop.

“Normally in a theater you could step off the stage and catch your breath,” explained Stromile, who danced in Pickett’s work in addition to choreographing his own play. “But we had to fill in all the holes and do everything at the same time. We dancers agreed that if anything happened, we just keep going!

Stromile thinks embracing new technology could be a way to get more people to the Opera for “the real thing in person,” he says, adding that he would like to see the company provide a range of experiences. interactive virtual machines, including previews and previews. In the wings. “It gives people who are not your typical ballet lovers another way to enter the world of ballet. People are really interested in getting that inside look. You could get funding to get virtual reality glasses and turn the whole building into an interactive space for people, who would then go and buy tickets to see the show live. I think we’re really on the verge of something amazing that puts us front and center and definitely makes Boston Ballet a leader in the field.

“We like to explore the limits and push the limits,” says Nissinen. “When there is no one to follow, you have to lead.”

Karen Campbell can be reached at [email protected]

“Simple and simple”: will the Bolshoi ballet dance to the classic? | Horse racing news

NOTICE: Summer at the ballet